This theory is the oldest in origin, holds that intelligence consists of one factor, a fund of intellectual competence, which is universal to all activities of the individual.

A man who has strength can move as much in one direction as he can in another. Similarly, if he has the fund of intelligence, he can utilize it in any sphere of life and depending on it, be as successful in one sphere as in any other. However, the ideas propagated by this theory are not born out in real-life situations.

It is seen, that a child who is good in mathematics may not, despite genuine interest and diligence, be able to do as well in civics while an above-average performer in the laboratory may not exhibit comparable competence in learning a language. Therefore we cannot assume good intelligence to be a guarantee of success in all spheres of human life, we can also not say that with certain specific types of abilities an individual would be entirely successful in a particular area and completely unsuccessful in other areas.

This shows that intelligence is not just a unitary factor and the unitary theory is, therefore, not acceptable.

General intelligence is a sort of general mental energy, running through all the different tasks. The amount of ‘g’ in a person depends on the amount of cortical (cerebral cortex) energy present and the maximum quantum of this is fixed.

Specific factor or capabilities give an individual the ability to deal with specific problems.

For example, an individual’s performance in Hindi is partly due to his general intelligence and partly due to some specific aptitude for language which he might possess. The factor g is thus present in all specific activities.

The total ability or intelligence ‘A’ of an individual will be expressed by the following equation:

This two factor theory of Spearman has been criticized on various grounds:

This theory was given by E. L. Thorndike. This theory is also called atomistic theory of intelligence. It considers intelligence to be a combination of numerous separate elements or factors, each one being a minute element of one ability. There is no such thing as general intelligence (a single factor) and there are many highly specific abilities which go into the accomplishment of different tasks.

This theory was proposed by L. L. Thurston. For factors not common to all intellectual abilities but common to certain activities comprising a group, the term ‘group factor’ was suggested. He concluded that certain mental operations have a common primary factor which gives them psychological and functional unity and differentiates them from other mental operations. These mental operations constitute a group factor. So there a number of groups of mental abilities and each of these groups has its own primary factor.

Thurston and his associates have identified nine such factors. They are:

Limitation of group factor theory was that it discarded the concept of the common factor.

Guilford (1961) and his associates developed a model of intelligence, they concluded that every mental process or intellectual activity can be described in terms of three different basic dimensions or parameters known as

Each of these parameters i.e. operations, contents and products may be further subdivided into some specific factors. 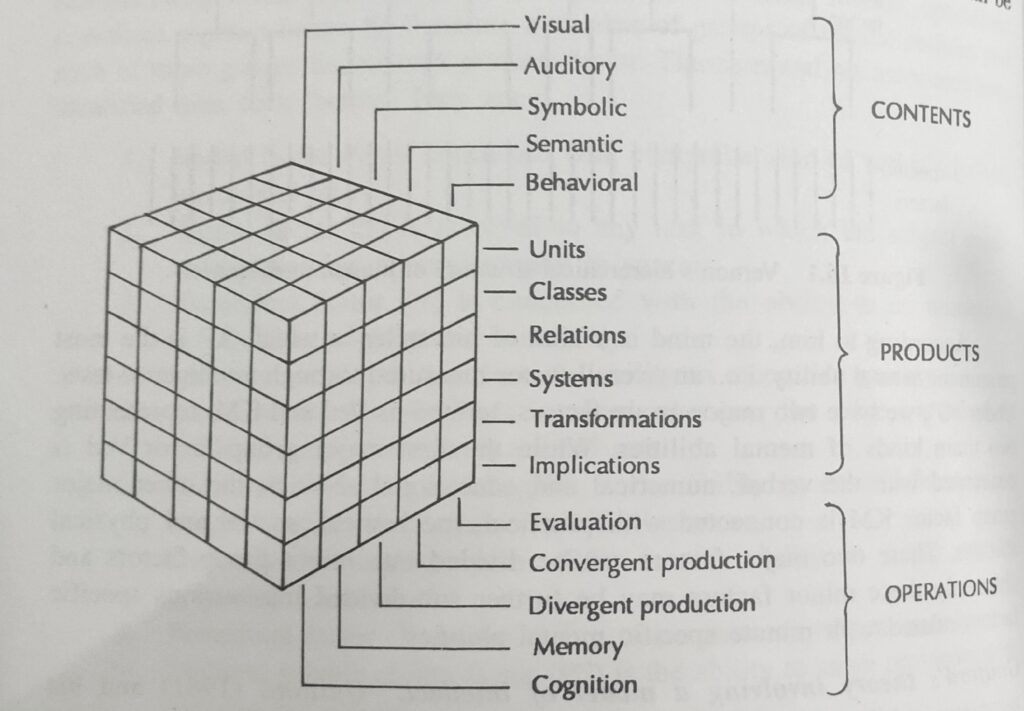 Through his researches later Guilford (1967) expanded his cube-shaped model of intellect to include 150 factors. He divided figural factor into two separate categories- visual and auditory.

The structure of human intelligence according to Guilford’s model can be viewed in terms of the three basic parameters along with their divisions into a specific number of factors. There could be 5×6×5= 150 factors in all, which may constitute human intelligence. Each one of these factors has a trigram symbol i.e. at least one factor from each category of the three parameters has to be present in any specific intellectual activity on mental task.