Emotion is one type of effect of a stimulus, other types being mood, temperament and sensation. Emotions is understood either as states or as processes. When understood as a state (like being angry or afraid), an emotion is a type of mental state that interacts with other mental states and causes certain behaviours. Emotions are part of the state of the mind. Basically, emotions are the body’s reaction to external or internal events. They are based on the interpretation of these events, and not on the event itself.

Psychologist Paul Eckman suggested that there are six basic emotions that are universal throughout human cultures: fear disgust, anger, surprise, happiness and sadness.

Robert Plutchik introduced another emotion classification system known as the ‘wheel of emotions’. This model demonstrated how different emotions can be combined or mixed together, much the same way as an artist mixes primary colours to create other colours.

It is a conscious and subjective mental reaction toward a particular event and is usually accompanied by changes in the physiologic and behavioural aspects. Emotion is a subjective experience. Emotions are needed for adaptation and survival, they influences a person on how he perceives the world. Most distracting emotions are connected to being uninformed or misinformed.

Emotions play a vital role in human life, whether in day-to-day life situations or in an artificial setting like a dramatic sequence. Emotion is a mental reaction whose outlet or expression is immediately sought. Dance, which includes the expressions of various emotions, demands of the artistes to have an insight into this aspect of human behaviour.

Various instincts and emotions related to it are given in the table below: 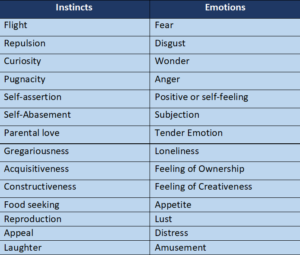 Emotions have some outstanding features. These are as follows:

Expressive behaviour is the outward sign that an emotion is being experienced. Outward signs of emotions can include fainting, a flushed face, muscle tensing, particular facial expressions, tone of voice, rapid breathing, restlessness or other body language. The outward expression of an emotion gives other people clues to what someone is experiencing and helps to regulate social interactions.

According to this theory, when for instance someone experienced a threatening situation (almost being hit by a car), her body first sent out chemical messengers, like adrenaline, that caused physical changes such as increased breathing and a faster heart rate. Her brain then sensed these physical changes and interpreted them as the emotion of fear. Changes in Behaviour and Emotional Expressions According to the Schacter-Singer model of emotion, both physical changes and conscious mental processing are needed to fully experience any emotion. The emotional label selected for the feelings was fear, and it depended in part on one’s experience with dangerous objects. This model explains why the same physical responses can produce different emotions. The brain decides whether fear, anger or surprise is the appropriate emotion, based on mental processing of physical information. Thus, interpretation of information from the environment, body feelings and experience figure more prominently in the Schacter-Singer model.

Emotions, often called feelings, include experiences such as love, hate, anger, trust, joy, panic, fear or grief. Emotions are related to, but different from moods, Emotions are specific reactions to a particular event that are usually of fairly short duration.

Mood is a more general feeling such as happiness, sadness, frustration, contentment or anxiety that lasts for a longer time. Although everyone experiences emotions, scientists do not all agree on what emotions are or how they should be measured or studied.

Emotions are complex and have both physical and mental components. Generally researchers agree that emotions have the following parts: subjective feelings, physiological (body) responses and expressive behaviour.

The component of emotions that scientists call subjective feelings refers to the way each individual experiences feelings, and this component is the most difficult to describe or measure.

Subjective feelings cannot be observed, instead, the person experiencing the emotion must describe it to others; and each person’s description and interpretation of a feeling may be slightly different. For instance, two people falling in love will not experience or describe their feeling in exactly the same ways.

Importance of Emotions in Education