An operating system is a system software which controls the activities of computer hardware, manages the allocation and de-allocation of memory, and is instrumental for the operation of other application software such as MS Office etc. on the computer. Thus, an Operating System helps the user to use the computer and then application program.

The software or programs are of two types:

The application software consists of programs or program packages which a user may use for his/her work. For example, MS Office is used for preparing documents, report etc.; PowerPoint is used for making slides for presentation; and AutoCAD is used for making engineering drawings, etc. There are a large number of such software which run on computers with the help of operating systems and her name does application program or packages.

Functions of an Operating System

The change was welcome by users because it is much easier to work with images rather than with command line system.

The computer systems have been evolving to incorporate new capabilities; therefore, the operating systems have to be modified to utilise the new development. After the release of Windows 1.0, many new versions have been released at various time intervals.

A brief account of prominent releases is given in table below. This is an incomplete list, and further, it does not include OS used on servers. 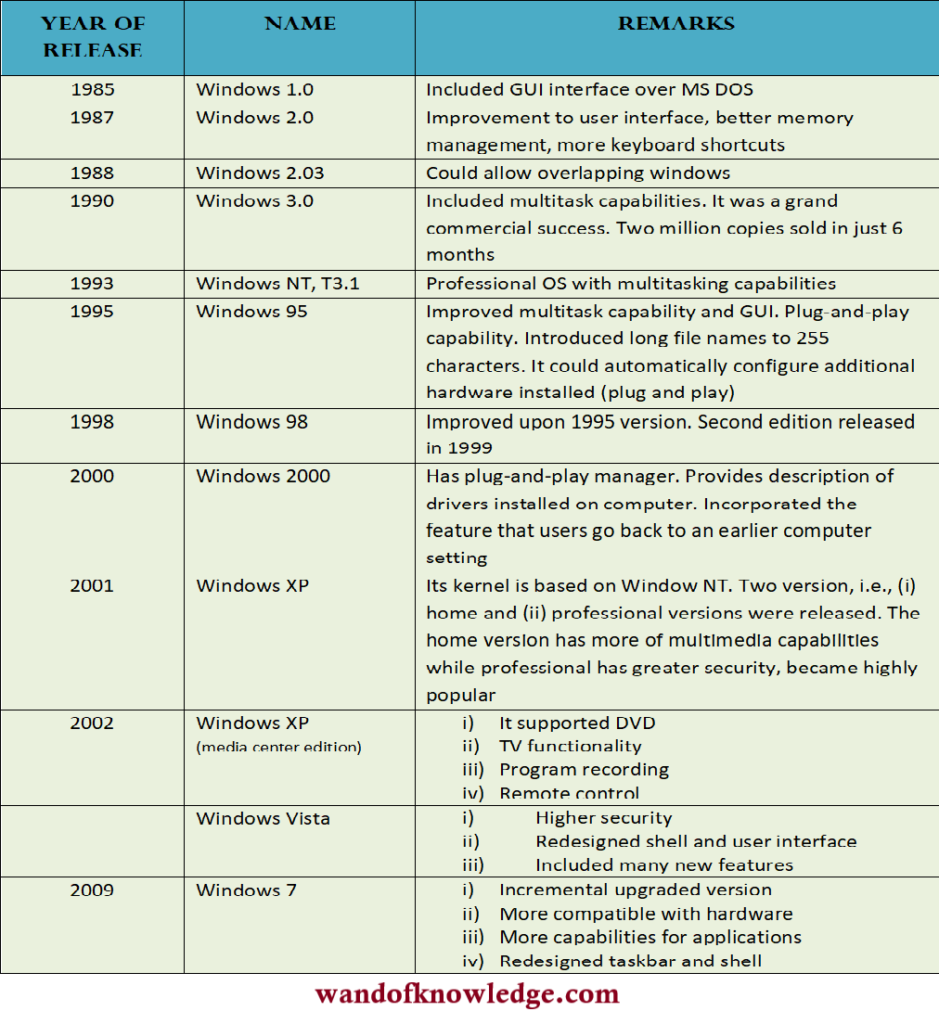 The persons who played major role in the development of Unix are Ken Thomson, Dennis Ritchie, Brian Kemighan, Douglas Mcllroy, and Joe Ossanna. All were employees of Bell Labs in 1969.

In fact, UNIX and C were developed almost simultaneously. C language was developed by Dennis Ritchie. The operating system UNIX was first written in assembly language, and later, it was rewritten in C in 1972. This conversion made it portable to many platforms. Only a small portion of code is necessary to change for a new platform. In fact, many versions of Unix have been developed by different organizations. The second edition of UNIX was released on December 6, 1972. “UNIX” is a trademark owned by the open group-an industry standard consortium. Other developed versions of Unix are often called “Unix-like” or “Unix” or “Unix-system-like.”

Unix could be ported to different types of computing platforms with minimum changes; it became popular in universities, particularly its BSD version developed by the University of California, Other Unix-like operating system are Minix, Linux, Mac OSX, and others. Unix is, in fact, a family of operating systems developed by many commercial organizations. Unix is a multitask, multiuser operating system

Richard Stalman, upset by the licenses, got determined to create a free software system based on Unix, He founded the GNU project. In 1985, he started Free Software Foundation. By 1990, many of the programs required for an operating system were ready, except the kernel-the core of an operating system.

Linus Talvalds wrote the kernel of an operating system initially for commercial purposes but later placed it under GNU GPL. This created an opportunity for developers to make a fully functional and free operating system, which came to be known as Linux after the name Linus.    The range of application of Linux is very large—from imbedded systems to supercomputers. The imbedded systems are based on very small CPUs which are used in a variety of machinery for control of their various functions. Examples are washing machines, cars, etc. While supercomputers are based on thousands of superscalar CPUs with throughout of trillions of floating-point operations. The operating system have found popularity with many governments, such as Brazil, China, Russia, Portugal, France, Germany, and state government of Kerala.

Linux OS may be operated through command line or through GUI. Linux is a free and open-source operating system. Linux is more popular with servers, mainframes, and supercomputers. It has captured nearly 60% market in this sector. In desktop market, its use is still far behind the Windows operating systems.