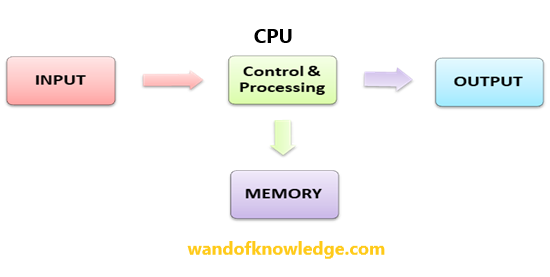 The CPU comprises of the following parts namely:

The control unit transfer the data required for an operation from the memory to the Arithmetic and Logic Unit (ALU) for the arithmetic operations such as addition, subtraction, multiplication etc. The ALU does only the calculated operations and logical operations. The raw data are transferred inside the ALU for operations and the process output (result) is returned to the user after the completion.

The computers which we use today have a storage unit or memory unit which is completely dedicated to the storage of the data, instructions and other files by the user.

The memory of a computer is categorized into two types which are :

ROM stands for Read Only Memory and the name itself implies its function. This memory is not accessible for any alternation. We can only view the data in ROM. The ROM consists of data which describe the functions to be done when a computer starts, the set of instructions to be executed when a system is started. This set of instructions is called as the BIOS and the performing of power on self test is the function of ROM. The ROM has a default function to perform whenever the system is started. No other data by the end user can be stored in this memory.

RAM stands for Random Access Memory and this memory is the read/write memory which state that it can be viewed and modified according to the users needs. This memory is a volatile memory which means that the data could be retrieved only till the power is on. Uninterrupted power or after restarting the computers, that data in RAM is erased. After the completion of the use of data in Ram, the space is cleared for any other application.

There is another memory called Cache memory.

There are following classifications of the secondary storage:

The hard disk comes under this category. This memory can be of megabytes to gigabytes. The data stored could be viewed and modified. This alteration of data could be done a number of times. Other examples of Magnetic storage are floppy disks.

The CD ROMs, CD-RW, DVD falls in this category. These devices are external storage devices. These devices could be accessed only using a laser beam to read the data stored on a post op it consists of tracks and sectors. The memory of these devices range from 700 MB to 800 MB. These are read only and read/write CDs.

The storage device uses both Technologies of Magneto and Laser beams to retrieve the stored data. The data could be retrieved and erased a number of x. Examples are Sony minidisc, Manoptin T5-2600.

The Universal Serial Bus is inserted through the USB port and is known as the pen drive. It is faster than other forms. It is the most compact device. The memory range varies from 4GB to 32GB, although higher range also is present today. This capacity of storage has never been in any other storage devices.