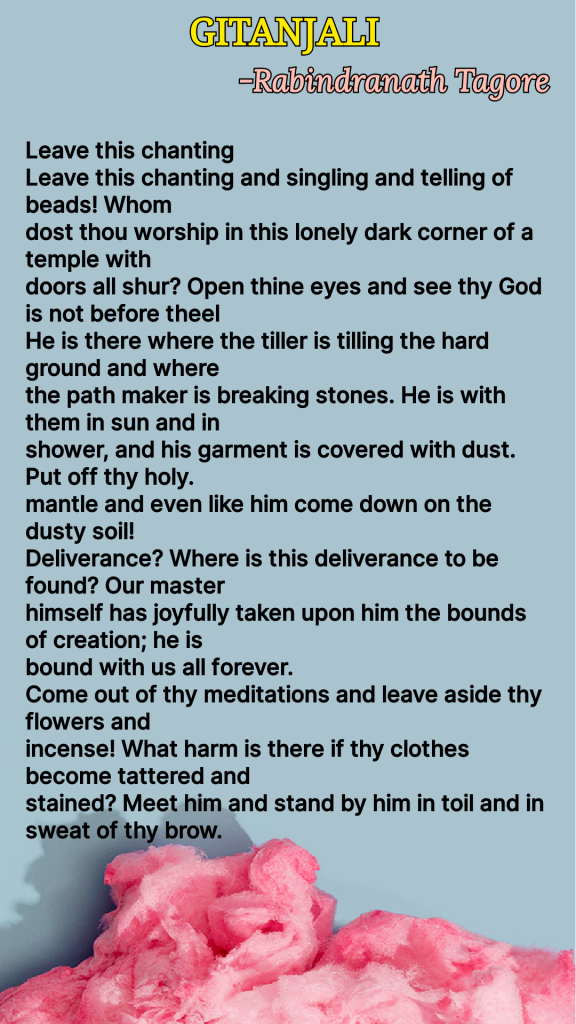 This is the opening stanza of the “Gitanjali” song “Leave this chanting and Singing” composed by the Noble Laureate poet Rabindranath Tagore is an enlightened mystic who comteines the physical and the spiritual admirably. His “Gitanjali” the anthology of devotional songs is originally in Bangla. But most of its songs were rendered into English for the benefit of his English literary friends and admirers by the poet himself. When published the “Gitanjali” took the western literary circles by storm and went into several editions the same year. The poet was awarded the most restigious, internationally renowned the Nobel Prize for Literature in 1913.

In this song the poet recommends the surest prescription of realizing God.

The poet is vehemently opposed to the traditional way of worship. He thinks that this is not the way to realize God. God loves simplicity and simple honest who earn their livelihood through hard labour unmindful of their personal comforts and convenience. The poet therefore decides to impress upon the traditional devotees the futility and hypocrisy of their endeavor. In order to do this the poet decides to be frank to the point of bluntness.

The poet tells the traditional worshippers of God to stop worshipping God singing his praises in the secluded corners of temples far removed from the common people. He tells them they are wrong in their approach because they can never realize God in this manner.

The poet believes that the traditional ways of worship are based on wrong belief that God may be achieved through pomp and show and by segregating from the common men and by renouncing the worldly duties. The poet is aware that this is a deep-rooted malady and needs a very effective remedy. So the poet chooses the remedy of plain talk verging on bluntness. It is for this reason that he starts with the harsh words exhorting the traditional devotee to realize his folly. He frankly tells him that the worshipper should himself realize that his method of approaching God is ineffective and wrong. For this he poet does not need any rhetoric or flourish,

This stanza occurs in the “Gitanjali” song “Leave this chanting and Singing”, composed by Rabindranath Tagore. The poet lambasts the traditional worshipper for believing that God may be realized through chanting prayers and renouncing the worldly commitments. He exhorts such worshipper to realize that can never be attained through this traditional worship and so he should give up these hypocritical worships.

In this stanza the poet tells the traditional worshipper that God lives where the humble farmer is ploughing the ground to grow food for millions of human beings. God is with the labourer who is breaking stones to make roads and paths for the benefit of his fellow beings. God moves about with these humble hard workers, who toil in hot sun and drenching rain unmindful of this individual comforts and conveniences without caring for their clothes. So the poet exhorts the worshipper that if he really wishes to realize God he should gives up his tradition worship and stop wearing the holy garment which segregates him from the unostentatious toiling massas because God himself loves these simple selfless hard workers and lives with them. God can be achieved through simplicity and honest labour

The poet is a practical mystic who wishes union with his Creator but his recipe for this union is vastly different from the traditional way. The poet blends this mundane with the spiritual. The traditional way his escapism. The poet exhorts the worshippers to shed the highbrow.attitude is workshopping God loves and cares for his creation and lives with the simple, honest hardworking farmers and workers who indulge in hard labour unmindful of their personal comforts, conveniences and appearance. To realize God, the worshipper is exhorted to emulate the example of God himself.

The stanza has been taken from the Gitanjali” song “Leave this chanting and Singing”. The poet, Ranbindranath Tagore, exhorts the traditional worshipper to give up his worship which is escapism. God can never be achieved through segregation and renunciation. To achieve God, the worshipper should emulate God himself who loves honest, selfless hardwork.

The poet is critical of the attitude and approach of the conventional worshipper and is determined to convince him of his folly in seeking God through escapism, discrimination and hypocrisy. In order to achieve his purpose the poet resorts to logic. He asks the worshipper bluntly what he means by “deliverance” and where he can find the sort of deliverance he is aspiring for. “Deliverance” means “liberation”, setting free” So from what the devotee seeks “deliverance”? From the worldly duties and commitments? From the responsibility of looking after his family and contributing to the welfare of the society he lives in? If he wishes “deliverance from these, he is very selfish. It is neither the deliverance of his body nor of soul; it is pure and simple “escapism”, which in reality is equivalent to “cowardice” a more aberration, a sin. The worshipper should face the realities of life boldly. He should honour his duties and commitments towards his family and society sincerely. He should not shy away from hard labour unmindful of his personal comforts and conveniences. God loves hard labour in the interest of millions. God loves simplicity and sincerity, God loves the selfless sacrifice of personal interests by the farmer and the worker, who do hard labour in sun and shower without caring for their clothes. God lives with very happily, God is, thus not free. He is bound to his creation, and that too willingly and happily with bonds of love and responsibility. When himself is in chains forever, why should his devotee seek “deliverance” and resort to escapism, despise honest hardwork, segregate himself from his own fellow beings and care for trappings?

The poet has demonstrated his versatility here. He has shown himself to be a practical mystic. While sincerely longing for a union with his Creator he has not overlooked the reality. God can be approached, not through despising his creation, the simple and honest folk who selflessly work for the millions, not through conventional worship but through participating in the activities of life devotion and delication. God can be achieved through binding oneself in the chains of responsibilities, in selflessly honouring the commitments of life and not through escapism. God binds himself in the chains of duty towards His creation and he does this happily, God loves simplicity and selfless hardwork and he can be achieved by menulating his own example.

The “Gitanjali” is an anthology of devotional songs by Rabindranath Tagore. Originally the songs are in bangla. But the poet translated himself most of the songs into English for the English literary friends and admirers. The western poets, readers critics were greatly impressed by tge intensity of fervour and simplicity of expression of these songs which were akin to the religious poetry of the west but how refreshingly novel and different! The “Gitanjali” won for Rabindranath Tagore the most prestigious and internationally renowned award, the Noble Prize for Literature in 1913.

This is the last stanza of the “Gitanjali song Leave this chanting and Singing”. This poet tells that God loves simple, hones, selfless, hardworking people who are unmindful of their personal comforts and conveniences. God himself is bound in chains of love and duty towards his creation and lives with them where they toil tirelessly and selflessly. The poet exhorts the conventional worshipper that he should shed his vanity of being a devotee of God, he should change his escapist approach in his quest for his Creator and should emulate him. He should seek him among the hard working peasants and workers who do not care for themselves. The worshipper should not shirk his worldly responsibility and should not despise honest physical labour. He should remember that work is worship. Deliverance of soul cannot be achieved through escapism but by binding him in chains of love of fellow human beings, hardwork unmindful of dress and personal comforts.

In the opening stanza of this poein the poet peremptorily told the conventional worshipper of God to give up his worship as it was all based on wrong assumptions. God is not realized through meditation in seclusion, through the chanting of “mantras” and singing of hymns away in the seclusion of some place in a temple. Then in the succeeding stanza the poet, with the help illustration and logic, tries to convince him of his folly. The devotee should not renounce the world but should honour his commitment to his family and society. He should not despise physical labour as God Himself hardworking farmers and workers who selflessly work for the welfare of society unmindful of their personal comforts and conveniences. God lives and moves about with these simple-hearted honest farmers and workers. Deliverance of soul can only be achieved through bondage of love towards fellow-human beings. God himself has put upon himself the burden and bondage of love for his creation and works forever its welfare. The poet exhorts the worshipper to step out of his ivory tower and emulate the Creator he seeks.

After explaining and exhorting the worshiper to realize the truth the poet resumes the preemptory manner in this stanza and asks the worshipper to give up the mediations and his conventional practices and offerings of worship and adapt himself to the correct and sure way of realizing God through love and hardwork after shedding his vanity. The worshipper should not mind if his clothes are soiled and damaged while working hard with the simple-hearted selfless farmers and workers. The poet tells that the worshipper should do this and meet his Lord in love and toil.

This poet convincingly drives his point home through sincere, honest, frank and at moments blunt speech.