Introduction of the Poem Background, Casually

The poem, entitled Background, Casually is a confessional and autobiographical poem. The poem is a testimonial to the poet’s innate Indianness and his commitment to India. In it, the poet reflects upon his success and his failures. His love for earth finds an expression in the poem. He affirms his Indianness and the fact that his roots are deeply embedded in the Indian disports. The poet has described his background or his past to quite as extent in the poem. His devotion to the country and the city of his choice is just as great as his commitment to his profession. He has depicted the city of Mumbai very realistically and with a lot of emotions. The poem provides an example of cultural and social alienation. He was an alien among both Muslims and Hindus.

Summary of the Poem 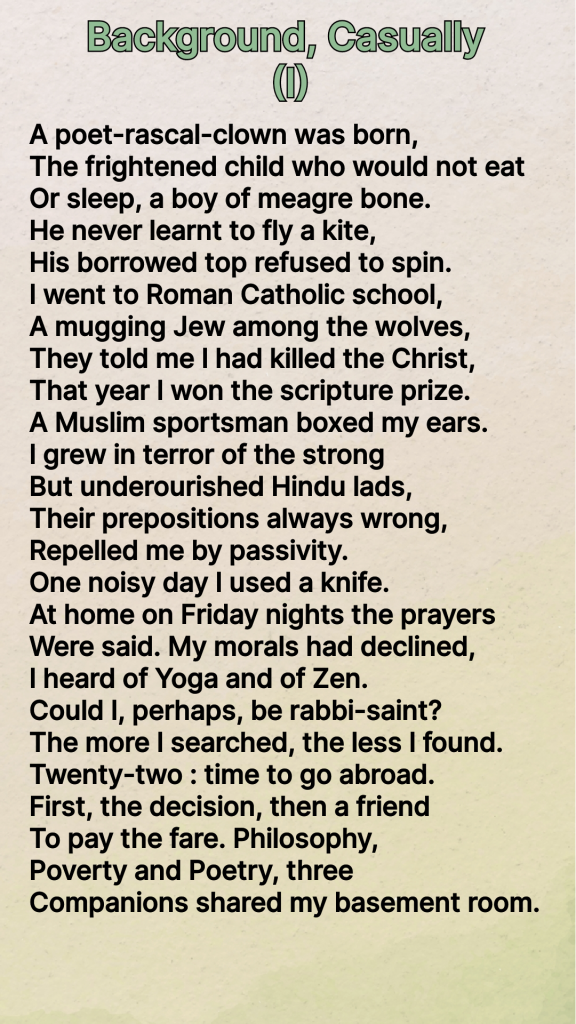 Since birth Nissim Ezekiel was a child, endowed with a poetic talent but he was also a child having in him a potential for roguery and clowning. He was a child who could be easily scared, with the result that he did not eat well or sleep well, and he was very thin. As a boy he could not learn that part of flying a kite a making a top spin. He was so poor that he could not afford to buy any toys of his own.

Ezekiel went to study at a Roman Catholic school in which he learnt his lessons by heart but where he was treated with great callousness by his school mates because he was the only Jew among the Christian, Muslim and Hindu boys. The Christian accused him of belonging to the race which had been responsible for the Crucifixion of Jesus Christ; and yet he was the boy who won a prize for the having studied the Christian scripture well. Muslim boys were so intolerant of him that one of them one day gave him a beating. As a result of that beating, he developed a fear of boys who had well-built and muscular bodies. The Hindus boys were not very strong but he felt repelled by the because of their excessively passive nature. One day, when he was being tasted and fomented by his school fellows, he used a knife against one of them in sheer desperation.

Ezekiel’s parents offered the usual prayers on Friday nights at home. It was the parents’ view that his behaviour was deteriorating, and that he was not paying sufficient attention to his religious duties. He heard some of the boys speaking of the Hindu Yogic exercises, and he also heard some people talking about the Jewish religion and its gospel. He asked himself, if he could become a rabba (or a Jewish priest) and thus become a saintly kind of person. But the more he questioned and the more he inquired into this matter, the less was he able to learn about what he was fit for.

When he had attained the age of twenty-two, it was felt by his parents that he should go abroad for higher studies. The parents had, of course, no money to pay his expenses for this visit to a foreign country (namely England). A family friend then agreed to pay for Ezekiel’s passage to England. In London he took a basement-rom for his lodgings, and there he had three-companions, namely philosophy, poverty, and poetry. 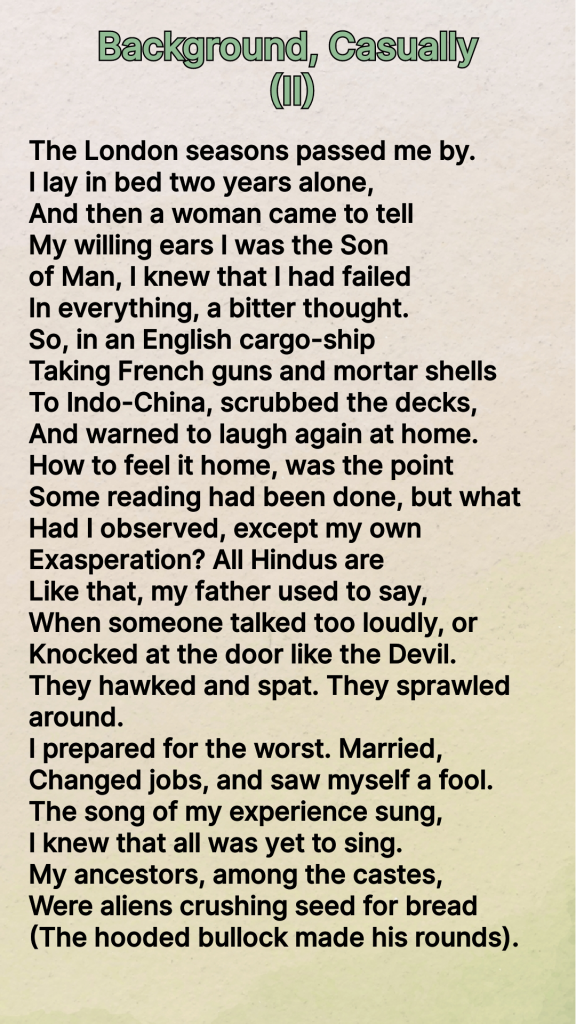 Ezekiel was not able to do anything conspicuously, even after a long time at London. He spent two years without much company. Then he became acquainted with a woman who began to keep company with him and who made him conscious of his mankind. At the same time he realized that he had not made my progress in any direction and that, in fact, he had failed in every way. It was bitter realization; and so he decided to get back to India.

Ezekiel lacked money to pay for his passage to India. So he took up a fourth-grade job on an English cargo-ship carrying French guns and other weapons of war to Indo-China. As this ship was to stop at Mumbai on its way to Indo-China, Ezekiel scrubbed the decks in order to be brought to his country. (It is noteworthy that the cargo-ship was English, that these weapons were being sent to Indo-China to be used in the civil war going on there). I was only when he had arrived in Mumbai, where his parents were, that he was able to laugh once more.

Ezekiel found it very difficult to hail India as his real home because here he had always been treated with contempt by the Hindus and because his father had told him that all the Hindus were alike in their behaviour which, according to him, was offensive and obnoxious. In any case, Ezekiel now got married changed his job, and then realized that he had committed a folly by getting married. The offensive attitude of the Hindus towards him continued. One of the reasons for their contempt for him was that he was descended from ancestors who were oil-pressers by their trade, and that he was not therefore a member of any respectable community or family. 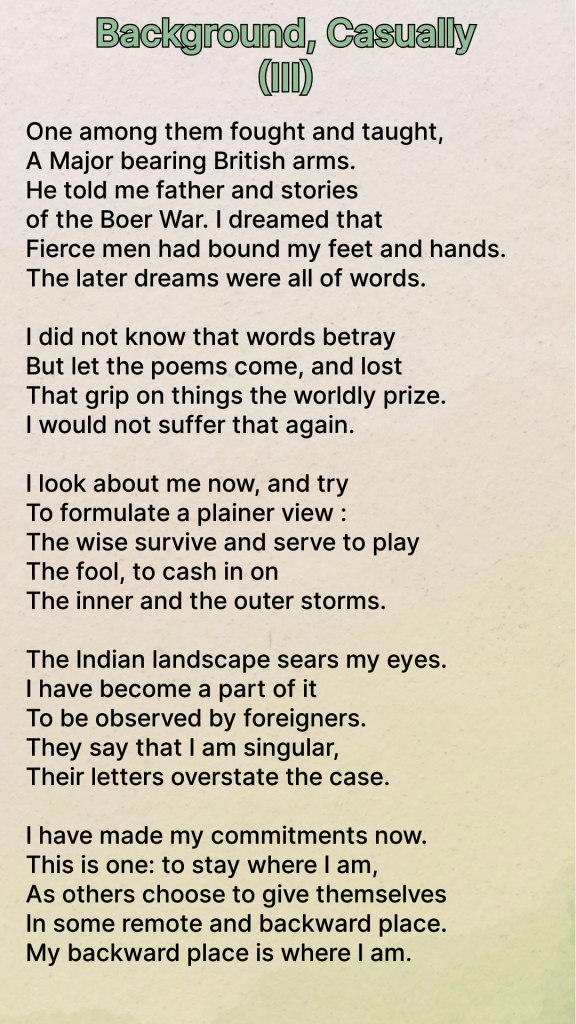 One of Ezekiel’s ancestors had served the British army as a major and had found in the Boer War. When he had first come to know about the ….he had been to have nightmares and had visualized himself as a prisoner I the hands of the enemy forces. However, subsequently his nightmares had given way to dreams about the kind of words which he should choose for writing his poems. In the beginning he did not know that words could betray a poet and could create misunderstandings in the minds of his readers, and therefore, he wrote his poems just as the words came to him, this carefare and spontaneous manner of writing Poetry led to his losing his trip or things, and he then decided not to continue with the facile manner of writing but to adopt a more worldly style which consisted in commercialising his poetry and to exploit such themes as the inner tumults of his fellow-human beings and the external, social upheavals.

Ezekiel’s final vie of this country is that its heat is scorching but that he has become so much a part of his environment that even the foreigners get the impression that he really belongs to it, however, in his opinion, the foreigners in their letters to him exaggerate his identification with his country.

Ezekiel, on his part, feels sure that he has made his commitments one of which is that he would stay on in this country where he finds himself, and that he would stick to it even if he is regarded as a man who has settled down in a backward country.