Sigmund Freud gave the concept of Psychoanalysis as a system. He put forward different views involving structuralism, behaviourism, gestaltism etc. to explain the human behaviour. This system was a blend of theory as well as practice for understanding human psyche or mind.

Structure of The Psyche or Mind

Freud explained the structure of human psyche or mind by dividing it broadly into two parts, in which the first parts includes three layers of mind as, the conscious, the unconscious and the subconscious. The second part includes three components that are; ‘id’, ‘ego’, and ‘super ego’. 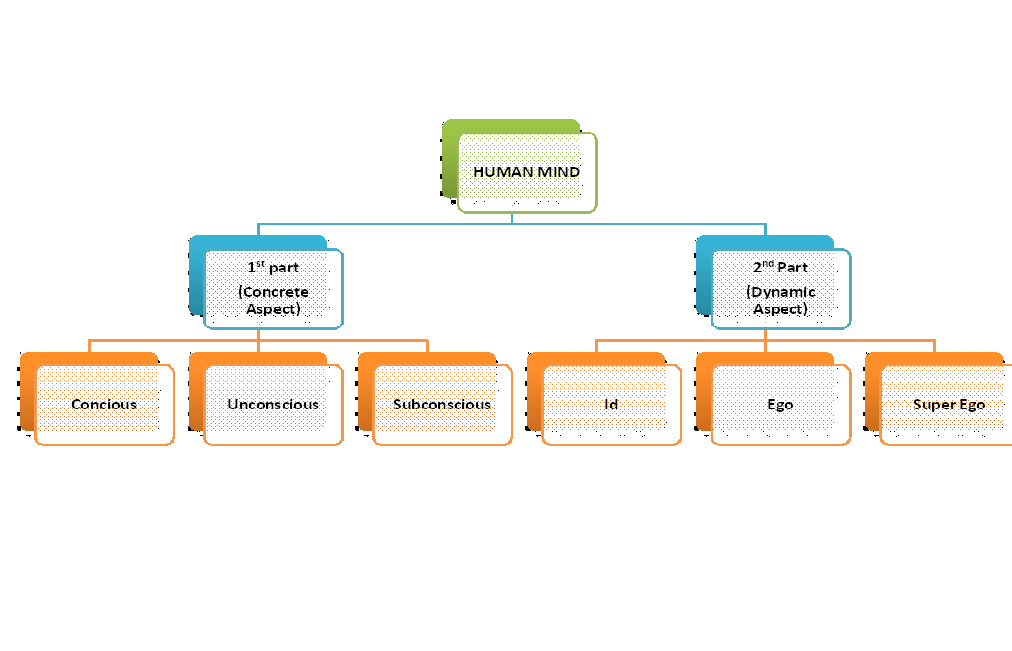 The Conscious, Subconscious and Unconscious Mind

The conscious mind occupies 10% of our total psyche. The ideas, thoughts or images of any moment that we are aware of, are the part of our conscious mind and present within this upper layer of mind.

The subconscious mind is present just beneath the conscious layer. This portion stores all types of information but they are suppressed or at dormant stage or untapped which are present just below the surface of awareness and can be easily brought back to the level of consciousness. Therefore this layer contains all the experiences or knowledge which have been gained or learned by an individual.

The unconscious mind lies below the subconscious part of mind and it is the most important part of our mind. It occupies 90% of our total mind or psyche. It deals with that part of our mental life which is hidden and usually inaccessible to the conscious. It contains all repressed desires, wishes, drives, motives and feelings, including the feeling of sex and aggression. This hidden part of mental life belonging to our psyche is responsible for most of our behaviour. Freud says that, whatever we do and our behaviour is always determined by the forces residing in our unconscious and not by the choices made by our conscious mind.

The Concept of Id, Ego and Super Ego

The second part as told by Freud includes three concepts which are, the ID, Ego and Super ego for explaining the structure of the psyche.

The Id is present by birth. It represents the pleasure seeking psyche of human and it is seated in the unconscious. It is the source of mental energy and of all instinctive energy of the individual. The Id is quite selfish and unethical. It follows no rules and focuses only on satisfaction of its own needs and drives.

The super ego is just opposite of the Id and represents the ethical and moral aspect of the psyche. It usually develops in a child at the age of five and is referred to as ‘conscience’ or the judgments from within. It is also governed by unconscious part of the mind but is not controlled by man’s instinctive drives. It is idealistic in nature and its goal is perfection, rather than pleasure-seeking or destruction.

It acts as an intermediary between three sets of forces, that is, the instinctive, irrational demand of the Id, realities of the external world and the ethical and moral demands of the Super ego. It creates balance between the Id and the Super ego.

The Concept of Instincts

Freud explained the shaping of individual’s personality and determination of his behaviour through the concept of instincts. It postulated two types of instincts; the life instinct and the death instinct.

The role of life instinct of any individual aims at survival and the propagation of species. It is exhibited through sex and love. Freud gave the name ‘libido’ to the driving force of the life instinct and related it with the sexual urge and sexuality in humans. The libido works on the pleasure principle. The sexual urge may be regarded as the dynamic force and the centre of all human behaviour at all stages.

Freud said, sex is the life urge or fundamental motive in life. All physical pleasures or any of the functions are ultimately sexual in nature. Sexuality is not present only in adults but children’s have sexual desires too which is present from the very beginning. He termed this as ‘infantile sexuality’. There are five stages in the psycho-sexual development of any children:

The flow of Libido

Libido, is called as the life maintaining energy which aims at seeking pleasure through sexual gratification. Its flow determines the type of behaviour or personality of an individual:

Criticism of Freud’s System of Psychoanalysis

This system was criticised mainly on following ground:

Freud’s system of psychoanalysis made following contributions to education: