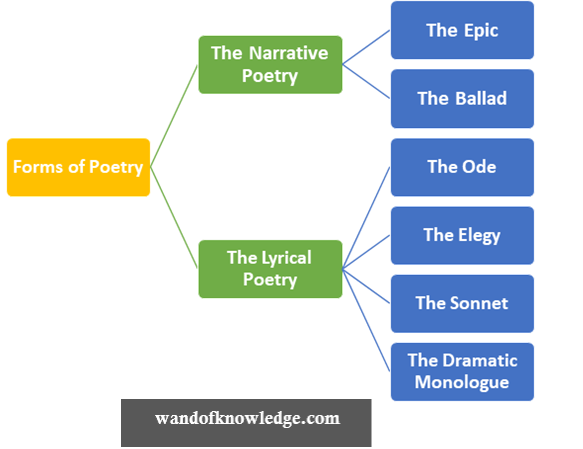 Important forms of poetry in English

There are basically two forms of poetry. The most prominent forms of poetry in the English language are the same as in most of the European languages. With a few significant exceptions, these have been borrowed and developed from the ancient Greek and Latin poetry. The two broad divisions of poetry are the Narrative poetry and the Lyrical poetry. The Narrative poetry has some element of a story in it, while the lyrical poetry gives expression to a passing mood or a thought or some deeply felt emotion of the poet. Narrative poetry is comparatively objective by its nature whereas lyrical poetry is generally subjective or personal. We shall now dwell at some length on each of these two divisions of poetry along with their important sub-division.

Since every narrative poem is a story in the verse forms it is comparatively longer than a lyrical poem or a lyric. As stated earlier, narrative poetry falls into two main groups (1) the epic and (2) the ballad. The epic is considerably longer than any other poetic form. The ballad is much shorter in length and much smaller in scope.

The word “lyric” has its origin in the word “lyre” Lyre is a simple musical instrument and a lyric was originally a song intended to be sung by a person to the accompaniment of a lyre. A lyric still has two characteristics implied in the above description :

In ancient times there were two important varieties of the ode-1) The Pindaric ode and (2) The Horatian ode. Both are Greek in origin. Pindaric ode is very elaborate and complex in structure. It was meant to be sung in chorus to the accompaniment of a dance. Its structure was borrowed from the movements of the dancers. It consisted of three parts—the Strophe, the Antistrophe, and the Epode-which together formed one unit (or paragraph) of the poem. This could be repeated as many times as the poet liked. The Horatian ode was simpler in structure. It consisted of short regular stanzas, similar in length and arrangement. The treatment is direct and dignified and the thought clearly developed. The Greek poet Pindar and the great Latin poet Horace were the greatest exponents of the Pindaric and the Horatian variety of the ode, respectively.

In English the ode has followed its own course. It is either Regular, like the Odes of Shelley and keats, or Irregular. As is clear from the name itself, the Regular ode consists of a series of regular stanzas and Irregular ode is written in verse paragraphs of varying lengths. Wordsworth’s Immortality ode is the most famous example of the Irregular ode in English.

During the Renaissance a new kind of elegy was introduced into English poetry. It was known as the pastoral elegy. It followed certain well-defined conventions. The poet introduced himself as a shepherd lamenting the death of companion. The setting is altogether one of rural. Nature, too, is shown to mourn the death of her dear son. There is regular funeral procession in which living personalities as well as deities and spirits aret supposed to take part. Lastly, there is a change of tone towards the end of the poem. The poet feels glad to see that his friend is not dead but he has only passed into a higher world and enjoys a better life. Milton’s Lycidas, Shelley’s Adonais and Arnold’s Thyrsis are the most famous English pastoral elegies.

The Italian Sonnet consists of two parts: the octave or a stanza of 8 lines and the sestet or a stanza of 6 lines. The rhyme-scheme in the octave is invariably abba, But in the sestet the rhyme-scheme is not fixed. It may have either two rhymes, thus rhyming cd cd or three rhymes, the three rhyme sestet taking different rhyme patterns. Usually there is a pause at the end of the octave or at the end of the 8th line. The octave introduces a thought or a situation and develops it to a climax in the sestet the thought or the situation takes a new turn. The octave generally introduces a problem or asks a question. The sestet is often in the nature of an answer or a solution.

The English Sonnet may be divided into four parts. It consists of 3 quatrains (stanzas of 4 lines each) and a couplet (a stanza of two lines). Each quatrain has two independent rhymes, coming alternately, the couplet using a new rhyme. Thus the rhyme-scheme of the full sonnet is a b a b, cd cd, e fef, g g. In the first three stanza the poet develops a situation to a climax and then in the final lines (the couplet) he springs a pleasant surprise by giving the situation a new and unexpected turn.