It was probably Bauhin who for the first time tried to classify fungi in his book Pinax Theatri Botanici (1623) wherein he described 100 species of fungi. Later, fungi were divided into six classes by Tournefort (1994) in his book Elements de Botanique while Carolus Linnaeus (1753) placed all fungi in his 24th class Cryptogamia in his famous book Species plantarum. The first detailed classification of fungi, however, was proposed by Elias Magnus Fries in his three volume book Systema Mycologicum published during 1821-1832.

Gwynne-Vaughan and Barnes (1926) rejected the contention of Saccardo and excluded bacteria and slime molds from fungi. Slime molds were treated as Forms resembling Fungi. They recognised only four classes of fungi on the basis of structure of mycelium and characteristics of spores. These four classes are:

Gaumann and Dodge (1928), who also did not include slime molds in Fungi, proposed a system of classification based on the life-cycle and development of fructification. According to them, Fungi were divided into the following four classes :

Bessey (1950) agreed with De Bary (1887) and placed the slime molds under the name Mycetozoa. His system of classification was largely based on the reproductive characters. True fungi were divided as follows:

The practice of dividing Fungi into four classes continued till 1958 when Sparrow (1958) created nine classes emphasising the importance of flagellation of the zoospores in the classification. He considered that flagellation should be treated as a good taxonomic and phylogenetic crietrion. These nine classes are: 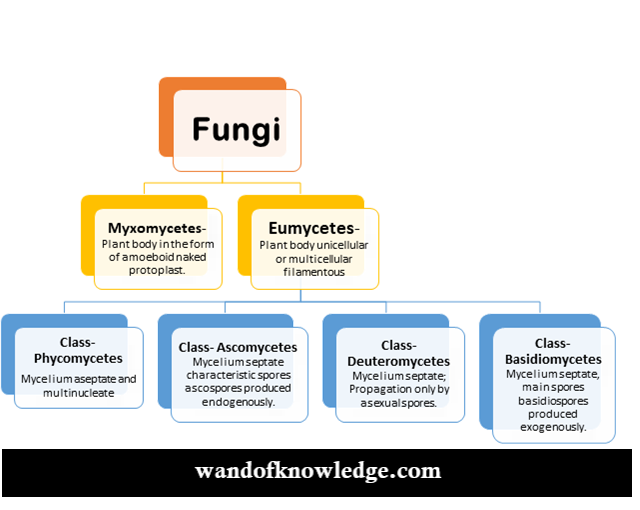 It would be clear from the above that modern mycologists are unanimous on the exclusion of bacteria from the fungi on the basis of lack of a true nucleus in the bacterial cell. There is a difference of opinion as regards the slime molds. Many mycologists favour their inclusion among the fungi. The Committee on the International Rules of Botanical Nomenclature has made the following recommendations :

Division Mycota- The mycologists place division Mycota in the kingdom Plantae. This division includes non-green (achlorophyllous) nucleated thallophytes (fungi) which are characterised by the following features:

I. Sub-division Myxomycotina- This sub-division includes the slime molds which possess the following distinctive features: –

All the free-living slime molds are placed in the class Myxomycetes.

II. Sub-division Eumycotina- All the other fungi except the slime molds are included in this sub-division. It is a heterogeneous group comprising about 80,000 known species. They are distinguished as below:-

The older mycologists divide the sub-division Eumycotina, which includes the true fungi, into four classes, namely, Phycomycetes, Ascomycetes, Basidiomycetes and Deuteromycetes. This scheme of classification of true fungi is still in vogue in many countries. The modern mycologists, however, consider that the class Phycomycetes, which includes all the lower fungi, is not a natural group of closely related forms. Alexopoulos (1962), therefore, took a logical step and split the lower fungi included in the class Phycomycetes into six classes.

An outline scheme of classification of Eumycotina (true fungi) followed in this edition of the text, is set out below. It is customary to divide the true fungi into two main groups, the lower and the higher Fungi.

A. The Lower Fungi (Phycomycetes)

They have comparatively a simple thallus which in some is unicellular and in other filamentous (muycelium). The septa usually remain suppressed in the actively growing vegetative mycelium. They reproduce asexually by sporangiospores (generally motile, rarely non-motile), rarely by conidia. The early mycologists placed the lower fungi in a single class Phycomycetes which is split in this text into the following six classes on the basis of presence or absence of motile cells in the life cycle and the number, form and position of flagella on motile cells.

B. The Higher Fungi

The somatic phase consists mostly of a mycelium which is usually septate. The septa have each a central pore and thus are incomplete. No motile cells are produced in the life cycle. The higher fungi comprise the following three classes :

The classification of Fungi outlined above has been followed in this text. However, for the benefit of the students a brief account of the classification proposed by Alexpoulos and Mims (1979) is given here. They place the fungi including the slime molds in the Kingdom Mycetae of the superkingdom Eukaryota which, in addition, includes four other kingdoms. They divide the Kingdom Mycetae into three divisions namely (i) Gymnomycota (ii) Mastigomycota, and (iii) Amastigomycota. The division is sub-divided into sub-divisions, classes, sub-classes, and orders.